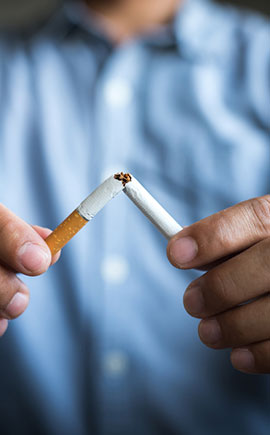 Many people do not realize the addictive quality of Nicotine until they try quitting it. Nicotine withdrawal causes varied symptoms at the level of severity proving it very difficult for many to overcome. Addiction to nicotine becomes hard to break more because of the psychological dependency than physical. Moreover, smoking isn’t an addiction that people hide like that of any other drug. It is quite public. And you see much smokes while you struggle to quit. Not smoking but the thought of not smoking ever again create a rush in the mind and leads to over anxiety and irritability.

You must know what to expect before it strikes you. Being prepared is always better than an unpleasant surprise.

Withdrawal timeline for a week after you quit smoking:

It is important to consult a doctor in this process so that he keeps a check on your body changes and gives you any necessary medication.

You must quit smoking with a little help; be it a doctor, family or friend. You are probably at the stage where part of you wants to quit smoking, but part of you does not. Maybe you are worried about withdrawal, or afraid that you’ll fail. Free your mind of all the negative thoughts and worries for now and forever. Focus solely on why you want to quit, and that will give you the motivation to succeed. The good news about smoking is that it doesn’t matter how much you’ve smoked, or how long you have smoked. If you quit now, your body will begin to repair itself and will take care of you even after years of neglect.

Nicotine takes 72 hours to be out of your body after you quit smoking. Nicotine withdrawal symptoms usually reach their peak 2 to 3 days after you quit, and are gone within 1 to 3 months.

(1) It takes at least 3 months for your brain chemistry to return to normal after you quit smoking.

(2) The last two symptoms to go usually are irritability and low energy.

Any effective smoking cessation program has to take into account this long adjustment period. It is why some doctors recommend weaning off nicotine slowly with nicotine replacement therapy.